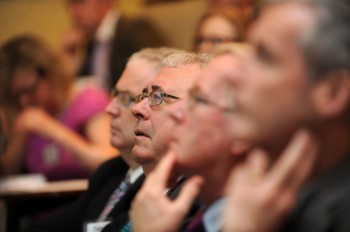 On June 26, 2013, Minister of State for Trade and Development Joe Costello TD launched the ESTHER Ireland programme beneath the stained glass windows of the Albert Hall, in the Royal College of Surgeons, Dublin.

Ireland’s membership of ESTHER follows a Memorandum of Understanding signed between the Health Service Executive (HSE) and Irish Aid in 2010, in support of health needs in less developed countries, and Ireland joined the broader European ESTHER alliance in 2012.

“This initiative will promote skill-sharing partnerships in countries with the greatest health needs,” said Mr Costello. “We have a winner here with ESTHER – a new way of doing work”.

“Partnerships such as these will contribute to major, sustainable improvement to health systems in those countries which are most vulnerable” he said. “They will also benefit Irish health professionals, who will gain invaluable experience and new skills. The Government’s new Policy on International Development commits us to harnessing the skills of Irish health experts and institutions to improve access to quality essential health services.”

Also speaking at the launch were Dr David Weakliam, chair of ESTHER Ireland; Declan Magee, vice-president of RCSI; and Tony O’Brien, director general designate, HSE. According to Mr O’Brien, the benefits of the ESTHER Ireland programme will be felt on both sides – in Ireland and in partner countries. “The partnership approach means there are benefits on both sides, and the programme will contribute to improving quality of health care in Ireland as well as in the partner countries.” 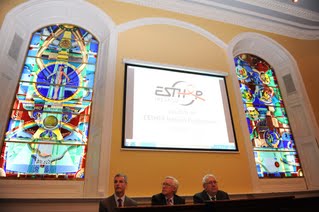 Eric O’Fynn, programme manager of the RCSI-COSESCA collaboration, and Dr Sami Ahmed, of the CUMH-OMH partnership, were on hand to show the impact that their projects are already having on the ground, informing over 60 attendees about their projects. Read more about these partnerships here.

After the launch, ESTHER Ireland held its first training workshop, chaired by Dr David Weakliam. The theme of the workshop was ‘Developing High Quality Partnerships to Improve, Health Care in Developing Countries’, building on the ESTHER themes of networking and building partnerships for sharing of knowledge and skills.The workshop provided those who attended the opportunity to engage in the global health dialogue, and provide a platform for the sharing of ideas, as well as the possibility for creating partner links.

There workshop included three sessions, which were followed by a panel discussion. Sessions included: How to develop an institutional link – principles and practice, moderated by Nadine Ferris France, Operations Director of the Irish Forum for Global Health; Governance and accountability in partnerships, moderated by Dr David Weakliam; and Planning and developing a partnership, moderated by Patricia Blunden, Project Manager of the HSE Change Management Resources.