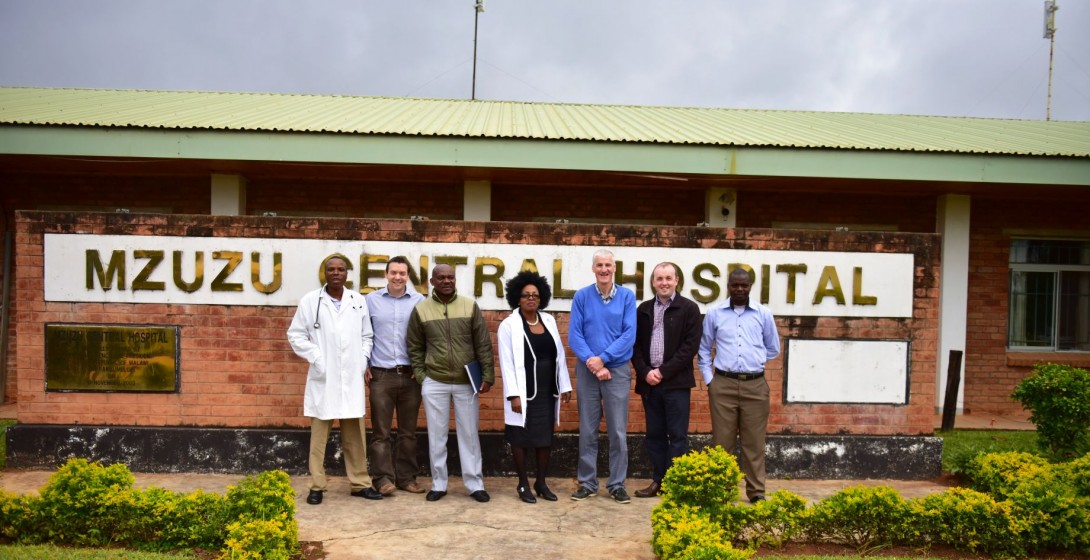 A focus on non-communicable diseases – abroad, and at home

Dr. Joe Gallagher and Dr. Peter Harrington are based at Palms Surgery in Gorey, Co. Wexford. The two doctors recently visited a group of health institutions in Mzuzu, Northern Malawi, in the hope of developing a partnership. The idea for applying for the ESTHER Ireland grant came on the grounds that a number of the doctors in the surgery had previously worked in Africa, in Malawi and Kenya, and wanted to reconnect and reengage with people they had met there.  For Dr. Gallagher and Dr. Harrington, the conversation stemmed from discussion of which areas in health and medicine in Malawi they felt would benefit most from the surgery joining together to work on projects. One of the areas that emerged was non-communicable diseases (NCDs) – a growing problem in Malawi, but which had previously been a low priority in the country’s health system.

Much of Malawi’s health system resources are focused on dealing with acute care and people suffering acute illness. This means that individuals are treated and do not require or undertake any follow up visits. In the case of NCDs however, patients do require follow up on an ongoing basis. The challenge that arises is that most of the care for these diseases is focused on hospitals and tertiary level hospitals, and having to travel long distances to receive this care means that many people are lost to follow-up. Due to the experience of team members at Palms Surgery, it was thought that the partnership would be of great benefit to both sides in terms of developing capacity and learning about NCD management.

Dr. Harrington went on to describe the situation within their own surgery, where more GPs are being asked to deal with chronic disease management, which was traditionally balanced between GP surgeries and hospital medicine. They are undergoing a change in general practice in Ireland, and increasingly GPs will be more resourced to look after patients with chronic diseases. This is leading to the evolution of chronic disease management through more protocol driven care, and Malawi is currently at the same stage in its national aims. Dr. Harrington noted that it had been almost 30 years since he last visited the continent of Africa, yet little had changed in intervening time:

There was a lack of doctors, the fact that institutions couldn’t rely on a constant supply of doctors.

Dr. Harrington also expressed his curiosity as to how NCDs are going to be managed given that so many of the resources in Malawi focus on acute care, which normally takes priority. The two doctors visited Malawi in the rainy seasons where hospitals were overwhelmed with paediatric pneumonia, malaria, malnutrition, and maternal and infant care issues, meaning that having the time to prioritise chronic disease would be challenging. Dr. Gallagher and Dr. Harrington recognised upon their visit that to manage chronic diseases in the area, a separate intervention and additional resources would be needed. In addition to this, a lot of work would be required in terms of getting chronic care management ‘on the radar’, since acute care in Malawi had historically been prioritised so heavily.

During their visit to Mzuzu, they met a variety of people, initially meeting with the staff of the medical department at Mzuzu Central Medical Hospital. Here they met with coordinating partner, John Chipolombwe, Head of Medicine at the hospital, who is very enthusiastic about NCDs and is currently trying to run training courses across northern Malawi. The two doctors then travelled to Nkhata Bay, to a hospital north of Mzuzu, where there was only one doctor for 450 beds, who was struggling to run an NCD clinic at his facility. They discovered that this doctor had developed the innovative approach of having a stamp to mark the patient’s passport, allowing clinical officers to carry out a checklist when notifying that a person has an NCD. Discussions were conducted on how to encourage the use of the stamp, and perhaps use it for other conditions such as asthma and COPD.  Drs. Gallagher and Harrington then travelled to Mzimba South, then on to St. John’s in Mzuzu, which were both dealing with the same issues as hospitals they had previously visited, and which were experiencing a lack of focus on NCDs, but were very interested in the idea of using a stamp or checklist.

Through their various connections and conversations, Drs. Gallagher and Harrington were able to meet with the head of NCDs at the Ministry of Health, John Misiaki, where they discussed a national plan. Although a national-level plan for NCDs is in place, there is a sense that this care must be distributed throughout the community, however it is still an outstanding question as to how this will be managed, given the lack of resources and current focus on acute care. One response to this was that a general practice training programme has recently been set up, currently being undertaken by 4 Malawian doctors. However, because of the lack of personnel country-wide, in order to tackle a problem of this scale there is a need to focus at the level of clinical officers and nurses to tackle the problem and drive solutions. Here, the use of checklists and being able to interact with modern forms of communication technology might be of most use.

Challenges do remain, even at the basic level of rolling out a relatively simple intervention such as the stamp to help guide NCD care for patients. For example, the stamps may not be universally available, and even ink to use them with must still be sourced and ready in place. The doctors noted:

It demonstrated the types of problems … where if you have a good idea, it can last for some time but when a specific resource such as the ink pad runs out, or the clinical officer hasn’t heard of, nor uses, the stamp. So suddenly, it dies. This is a problem, and where we think big western technological solutions are the solution, really, if there is any solution and progress to be made, they need to be ‘dogged and perseverant’ and try and continue to support something.

Whilst both Dr. Harrington and Dr. Gallagher had worked for periods in the developing world, they now acknowledged that to make an impact in this project, they needed to become involved in a long term capacity. The initiatives needs to be pushed and supported, and it is a feature of Africa that helpers tend to come and go and their ideas often die away, and how these initiatives are maintained is the big challenge. When talking to various health care workers and clinical officers, the stamp was the most universally agreed upon tool. It was visual, simple and did not require a high-technology solution to work.

When asked how they felt the Palms surgery would benefit from this partnership, the doctors described a visit by a Malawian colleague, Ms. Beatrice Mwagamba, to the Palms Surgery prior to their visit to Malawi, who helped the  doctors in the practice to reflect upon their own work and ask themselves why they were doing things certain ways when there are other ways to do it. Three of the GP’s in the Palms surgery had worked in Africa at different times and it had wakened their interest in that area of medicine, and caused them to look at their own protocols. Dr. Harrington and Dr. Gallagher noted:

What’s interesting is that all the staff, from doctors, to nurses, to people in administration, those who hadn’t been to Africa before, were interested in what they could get involved in and the idea of going to 6 months to a year and become involved in initiatives like education … helping develop the stamp, or helping develop online sessions for discussing things. Another thing that appeals to people is developing friendships and collegialities between the northern and southern institutions.

The Palms Surgery is multicultural in itself, and this experience made them remember not to just think about what is the Irish way of doing things, but to take in other perspectives and learn from other contexts.

The most important aspects that the doctors felt they learned throughout the visit was the building of collegiality between the two institutions. Much of time was spent meeting people and talking to them, yet equally this applied to listening:

On one hand the doctors often conjured up ideas and thought they were fantastic, where in actual fact, you go out to these countries and they produce something simple like a stamp and they say ‘this is what we need, and this is what we think we need to do’. It’s important to have a reciprocal session about topics where both institutions discuss what they think is the best thing to do, and a needs assessment.

The doctors also found it useful to meet the local health and administrative staff at the district hospitals, as well as the Ministry of Health contacts, acknowledging that they are the ones who will ultimately organise and help move their institutions, and the national plans, forward.

It’s important to take your time with the projects in these partnerships. It is a marathon, not a sprint, however great it would be to come back and say ‘we’ve developed this fantastic project that’s all working’. It really is about going gradually, taking small steps and finding what works for people. ‘Have a short-term, medium-term and long-term plan’ is what we are working with at the moment and try and develop that sort of strategy.

— This interview was conducted in summer 2016, by Ellie Marley, Operations Intern with the Irish Forum for Global Health and ESTHER Ireland.